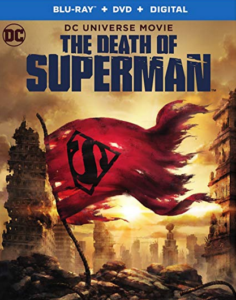 Will this animated adaptation of DC’s 1992 “death” of Superman storyline please those old enough to have read it when it first appeared? Considering that grown men still sufficiently juvenile to persist in taking an interest in comic book characters must have rather low standards for keeping themselves entertained, one assumes that it probably will. In between automobile-chucking super-brawls, personal drama involving the Man of Steel’s tense relationship with Lois Lane keeps this feature-length production from becoming overly monotonous – but, as with most superhero sagas, the ethnic subtext remains the most intriguing aspect. 3 out of 5 stars. Ideological Content Analysis indicates that The Death of Superman is: Anti-Russian. Lex Luthor mentions having enjoyed a “private performance by the Bolshoi”, connecting Russia with supervillainy in audiences’ minds. Anti-gun. A police officer’s passing reference to assault weapons highlights the danger to law and order posed by private firearm ownership. Feminist. Strong, sarcastic, frowning women abound. Black-supremacist, with blacks disproportionately represented in prestigious and powerful positions. The mayor of Metropolis is black, as are the two top scientists at S.T.A.R. Labs. Judeo-globalist and anti-white. Superman, whose creation was a Jewish response to the Nazi concept of the Aryan superman and whose Justice League receives funding from the one-worldist United Nations, represents a confident Jewish self-concept, with Kal-El (interpreted by some as meaning “Voice of God” in Hebrew) being a Kryptonian (i.e., a crypto-Jew) who conceals his power behind the nerdy façade of the WASPy-sounding “Clark Kent”. Significantly, “Kent” occupies a position of influence in the media through his job at the globalism-evoking Daily Planet (although DC obfuscates Jewish control of the media which in this series is “White” via the newspaper’s editor-in-chief Perry). "Kent"/Superman is an effective arbiter of truth and justice as long as kryptonite is not utilized against him – i.e., as long as his enemies do not confront him with his secret Jewishness. Lex Luthor – whose name echoes history’s second-most-notorious critic of Jewry – almost seems to be explicitly criticizing Jewish influence when he decries “obsequious cretins who worship aliens, believing them to be the agents of justice. But I have seen the alien’s true face,” he explains. “I understand his threat.” Luthor’s subtextual anti-Semitism is then emphasized when he employs the German word “ubermensch”. It is moral exemplar Superman, however, who selflessly saves his archenemy when Doomsday comes.
Proper Review
Like Love Haha Wow Sad Angry